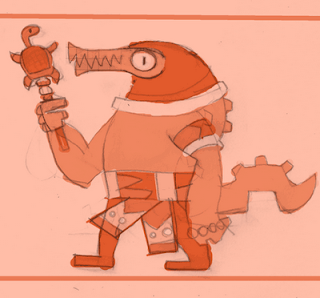 Garkadun, the crocodile trickster god. Garkadun controls time, which Pygmies consider the greatest trick of all. Their calender counts down to his Final Joke, which will begin in three cycles.

Worshippers of Garkadun gain favour for bloody practical jokes. They don't have to be clever, as long as there's a lot of blood. Any enemy dispatched in a sufficiently hilarious manner counts as a sacrifice to Garkadun. He also enjoys tricks where someone's circumstances are flipped. A king becoming a beggar would split his scaly chops in a mighty favourable grin.


Garkadun will quickly lose interest in a Cleric who fails to do anything amusing. Boring Clerics must do something interesting and funny immediately, or earn disfavour.


Garkadun will help his worshippers with timing if it's in service of something funny. If his cleric needs someone to come through a door at exactly the right moment to pull off a trick, he'll make it happen. He can also make reptiles docile towards his clerics. He is most powerful in jungles and swamps.


His enemy is Karnopticon, the Insect Queen. Clerics of Garkadun can turn insects and all who worship them.
Posted by Jack at Friday, June 29, 2012
Labels: Dungeon crawl classics, gods, Patron