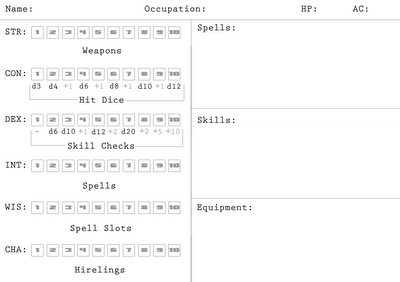 I've been playing X-Com lately. You control 14 dudes as they die, panic, succumb to alien mind control and turn into zombies. At the end of a mission you level up the survivors and buy another crateload of rookies. Death is constant and hard to anticipate, so a lot of the strategy revolves around sending in the cannon-fodder rookies to protect the guys you care about.

It's interesting, because as far as I can tell early D&D worked the same way. A lot of the traps in the DMG seem totally ridiculous for the current fashion of ~4 PC's. Save or Die effects, level drain, diseases - Matt's poor PC died to Rotgrubs in a single turn, before he had any way to tell what was happening or how to stop it. These things only really make sense if you have 10+ PC's, with some hirelings for good measure.

(You'll have to excuse me if I'm reiterating stuff everybody knows. D&D is still a strange new land to me.)

Creating 10 normal characters and trying to keep track of the results would take hours and drive me insane. So, here's an experiment: Jack McNamee's 10 Second System (Matt helped).

--------
Roll one d6 for each starting ability score, then roll an occupation and starting equipment (You can use this DCC character generator for those). Your starting character is finished.


Here's what the scores mean.

Strength: The weapons you can use. Whenever the PC's find a weapon, rate it out of ten; you need that much strength to wield it. Bonuses to damage and to-hit are inherent in the weapons you find, rather than something you earn as you level up. Roll under it on a d10 for strength checks.

Constitution: The hit dice you get whenever you level up. Roll under it for fort saves.

Dexterity: Skill checks and reflex saves. Whenever a PC needs to make a skill check, rate the task: 5 for trivial tasks, 10 for normal tasks, 15 for hard and 20 for impossible. Your dexterity shows which dice you roll for it; d6 to d20+10. At 1 dex, you cannot perform any kind of skill checks.

You can learn skills from expert thieves. If you haven't been trained in a skill, use 1 less dex when rolling for it. If Dret Thiefton has 3 dex, he'll roll a d6 instead of a d10 for any skill he hasn't trained in.

Intelligence: Which spells you can learn, and will saves. Whenever the PC's find a spell, rate it out of ten; you need that much intelligence to cast it.

Wisdom: The number of spells you can hold in your brain at once. Vancian rules. Roll under for Perception checks.

Charisma: Which Hirelings you can get. Hirelings can be level 1 to 10; that's how much charisma you need to hire them. At 5 Cha, you can hire level 5 guys. High level hirelings will also have better equipment, and may know some skills or spells. Roll under it for a morale check to stop your hirelings panicking or stabbing you in the back.

Every time you level up, you get one hit dice of HP and one extra point of ability score to allocate wherever you want. Max level is 10.

The system assumes every player will have 2-4 PC's. You get 2-4 new PC's when the last PC from your old batch dies - until then you have to rely on hirelings to restock.
-------

So, most of the traditional leveling up choices occur in the world. You have to find spells and skills, instead of being abstractly given those things when you level up. This is partially inspired by the old D&D ideas to that effect, and partially inspired by the way Dark Souls and X-Com work. Your PC is defined by the things they have, and their stats define the things they can have.

It's fast as lightning and completely classless. It's not going to be for everyone. I'll try running it on Monday, I'm excited to see if it works. Tell me what you think in the comments..
Posted by Jack at Friday, September 28, 2012 No comments:
Labels: 10-second system, Character generation, Dungeons and Dragons, Rules


Here's a way to incorporate the Caste System into your game, ruthlessly stolen from the brilliant Small but Vicious Dog and tweaked to add some heft to Charisma. There are 8 ranks in the Caste System:

8. Queens, Kings, and Heirs. Anyone with a right to the throne.

7. Lords, Barons and Titled Gentry; the highest rank you can possibly be without being born into royalty. Own all the land.
6. Nobles, Aristocrats and Knights. Oversee the land for the lords.
5. Shopkeepers, wealthy merchants - anyone rich who had to work for their money.
4. Freemen. Commoners who can choose where they go.
3. Villeins: Peasants, commoners, laborers. The vast majority, working the land as slaves to a Lord. They are forbidden from leaving their lord's land.
2.  Lepers, beggars and guttersnipes. Loathed, but tolerated. Will not be allowed in most places.
1. Witches, devil-spawn, and mutants. Will be killed or chased from any major city or town if seen.

A PC is normally Rank 4, a Freemen; low class peasants who can still choose to go where they like.
Your Charisma modifier effects your rank. +3 elevates you to a Rank 7 Lord, -3 makes you an ostracized freak.  You also get + or - one dice worth of starting money per point of charisma mod. You gain rank naturally every three levels or so, but you can also move up and down ranks through your actions.

The social demands of caste-system etiquette are subtle and complex. You can fuck with anyone below you.

One rank below you: You can ignore anything they say. They must give a good reason for disobeying any orders, or you're allowed to inflict any kind of non-painful punishment on them.
Two ranks below you: They must follow your orders. You can inflict any kind of non-lethal punishment on them for disobeying..
Three ranks or more below you: You can kill them without any legal ramifications or comment. They must follow any order, to death and beyond.

The same applies in reverse; don't fuck with anyone above you, or they could start throwing out punishments. The system is only enforced socially, obviously. Deep in the wilderness, outside of society, it's easy for the underlings to realize that you're just a weak man in a funny hat.

Unless you go a step further and use;

You aren't just a lord because your dad was a lord; you're a lord because God put you there. The medieval point of view is literally true in all aspects: The caste system is enforced by the universe, and nobles actually are better than peasants in every way.

So, if Graunch the Leper tried to take a bite out of King George, Graunch would be rolling at -6 to everything, while the King would get +6 to everything. This doesn't apply to anyone who doesn't care about the caste system.

A statement of intent: I'm not using these rules to stop my PC's fucking with high-level NPC's. I assume they'll still be constantly toppling governments like always. What I'm going for here is a way to give your Charisma score some serious social weight without forcing people to make Cha checks instead of roleplaying.

With these rules, a high Cha makes you a force to be reckoned with in the city, and a low Cha could make you flee from any nobles you see. It even has hireling implications: You can order anyone three ranks below you to come on an adventure, whether they like it or not. Lepers or Peasants will be terrible at fighting, obviously: You'll still need to shell out coin for the good fighters. But being able to order up a mob on demand is pretty neat.
Posted by Jack at Wednesday, September 26, 2012 2 comments:
Labels: Caste System, Rules, Small but Vicious Dog

I like the idea of level drain. It's like taking bites out of your soul. It makes any enemy, no matter how goofy, into a terrifying thing that you never, ever want to fight, or go near, or look at. It sends the message: "There is nothing you have that I can't take."

But jeeze, that book-keeping. There's way too much fiddling around to consider going up or down levels in the middle of a fight.

Dark Souls - the best D&D videogame - has some great alternatives.

Your max HP is halved. How simple is that? Keep track of what your max HP was, and keep increasing that as normal as you level up, but you can never have more than half of that. Season to taste. The sadist DM may wish to allow players to be double or triple cursed to 1/4th or 1/8th of HP.

Curses are generally inflicted by Basilisks, which obviously look like this:

Also known as "Curse Frogs," these guys puff up their throats and spew cursed smoke everywhere. 1, 2, or 3 saves before you are cursed, according to taste. Anyone who is cursed will immediately solidify as a jagged stone statue, returning the next morning as a shivering wreck. These statues will be littered around any place where Curse monsters live.

The Accursed are the only ones who can harm ghosts. In the middle of ghost towns, you can find men who will take away curses. Curses can never be lifted - only transferred onto someone else.

Your head sprouts egg-sacks. The creature inside will devour half the XP you earn from now on. Every time you level up, it will too, growing and hatching into... well, you're the DM. Use my worm table for inspiration if you want.

This malady is generally inflicted by the egg-burdened servants of Chaos Witch Quelaag.

They'll grab your legs, and their maggots will infest your head. If you receive their sacred burden their leader will welcome you as one of their own, and he has much sorcery to teach. They may even have a cure, though they consider the idea the vilest heresy.
Posted by Jack at Wednesday, September 12, 2012 3 comments:
Labels: Curse, Infest, Level drain, Rules

Every time my players go to buy weapons, I drag out the equipment list and they spend half an hour deciding which of the 10 weapons and armors that exist in the world they want to use. I've always wanted to recreate the fantastic variety of weapons in games like Dark Souls, but make that equipment list any longer and we'd be looking through it for hours.

Zak has it figured out, obviously. Random tables fix everything.

Anyone selling weapons has about 1d4 of the weapons below for sale. Roll a d10 for the middle of nowhere, d20 for a normal town, and d50 for the big city. The number you rolled is also how much it costs.

Some weapon rules: For ranged weapons, Short range is the size of a dungeon room, medium range is about the size of a football field, long range is anything you can see (At DM's digression). Some weapons on this list have stat requirements, like "Requires +2 str". Anyone who doesn't have that stat can still use the weapon, but they'll critically fail on a 5 or less.