DCC Magic for the rest of us.

I love the chaos of magic in Dungeon Crawl Classics, but if I look up another spell table I'll go insane. Here's a simple version for you folks at home.

If you succeed, you cast the spell and keep it. If you fail, you lose the spell for the day. On a natural 20, you get some incredible super version of the spell. On a natural 1, the spell backfires hilariously and you become hideously corrupted. The DM should just make these critical spell effects and mutations up on the spot, taking into account the context. DCC has plenty of examples, and you can use The Benefactors for inspiration.

Clerics are slightly different. First, they add their Wisdom/Personality modifier to spell checks instead of Intelligence. Second, when they fail, they incur Disfavor from their god instead of losing the spell. Disfavour adds 1 to their critical fail chance for spells. When they inevitably end up critically failing a spell, their god curses them. Make up some terrible fate based on their god.

A cleric spends all day pissing off her god, and all night trying to patch things back up again. Clerics can get rid of disfavor by pleasing their god with sacrifices and the like, and all Disfavor disappears if you spend your normal 9+ hour rest in deep meditation and prayer.

Magic-users can improvise special effects for a spell, in the same way that a fighter can improvise exciting ways to stab someone. Say, set the ground on fire instead of sending out a Fireball, using Turn Unholy to destroy demonic artifacts or Sanctuary to stop monsters from entering a room. Anything that fits in with the general feel of the spell is fine. Just raise the spells difficulty by 2, 4, 6 or more, based on how hard the thing they're trying to do is. EDIT: or you could use this called shot mechanic. Raise their critical fail chance and lower their critical hit chance. The crazier the thing they're trying to do with it, the more likely it is to misfire.

This is my favorite idea on this page. DCC has a lot of spells like "Force Manipulation", which could give you an invisible weapon, platform, blockade or manservant, depending on your roll. The variability is great, but having it depend on a roll sucks. This rule makes normal spells as free-form and weird as they are in DCC and gives power to player creativity instead of forcing them to look shit up in a book.(!!!) 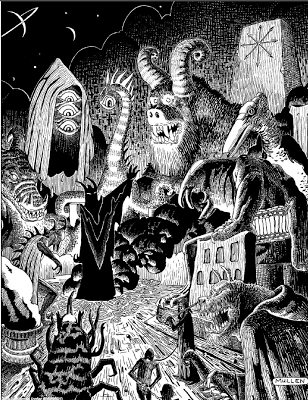 All spellcasters have friends in high places. Wizards can call on the despicable beasts they've made obscene pacts with, and Clerics can call on their Gods. If they want to ask their pals for aid, have them roll a spell check as usual. They can ask for a favour as good as the roll allows; beat 5, 10, 15 or 20, where 5 is a minor boon and 20 is apocalyptic. Wizards will of course have to satisfy some dark price later on (again, see The Benefactors). For Clerics, asking their god for Divine Intervention incurs +10 to Disfavor.

(This means that clerics will generally ask their god for help at least once a day, while Wizards will avoid getting in debt to their Patrons unless they can possibly help it, and then wish they hadn't for the rest of the game.)

You can use this system to DCC-ify spells from other versions of D&D. Vancian spellcasters should get all their spells, instead of memorizing a set number of them per day. This may seem like a lot, but that high failure rate means they'll lose plenty of them without casting them. Clerics and wizards should both start with about 4 spells and get one more per level.

On adding your level to spell checks: in DCC, level 10 is the max. Adding 11-20 to a spell check makes the whole thing a little redundant, so you might want to consider giving out that +1 to spell checks every second level if your system goes up to 20.
Posted by Jack at Monday, February 11, 2013
Labels: Dungeon crawl classics, Dungeons and Dragons, Magic