Everybody in the blog-o-sphere is going crazy for Monsterparts, and I can't blame them. It's about kids solving mysteries, which is my fetish. I was inspired by his treatment of HP to create my own system: an extended death save that slowly grinds you down into the dirt.

One of the reasons to play as kids is that kids are shit at everything. They get tired, they break down, they fall over and can't get up. This system is designed to capture that sense that every action is taking something out of you. After sprinting, leaping, stabbing, falling, getting blown up and shoved and punched through walls, you will not be as good as adventuring as you were when you skipped rosy-faced into the monster's lair.

The burnout bar combines insanity, wounds, HP, exhaustion, and damage over time into a single system. I designed it for kids, but it's good for any game where you want slow exhaustion and quick death. Here's how it works:

Everything that wears you down adds something to your burnout bar. That includes psychological trauma, running, acrobatics, stress, lack of sleep, carrying heavy loads, getting drunk, falling down pits, being beaten, shot, stabbed - it all adds a dice worth of exhaustion to this bar. Something only a little tiring, like climbing up a building, might be a d4. An exhausting act, like getting stabbed, might be d12 or more. 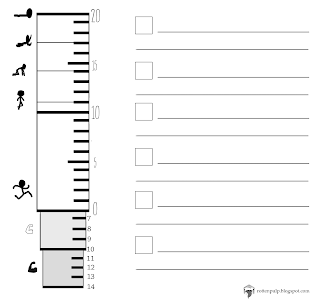 Here's a good rule of thumb for damage: Think "How many times could you do this before you'd fall unconscious?" If it's about twice, use a d20. Four times, d10.

You can see by the stick figures along the side that exhaustion takes its toll. At 11, you can't run - only stagger wildly. At 14, you have to crawl. At 17 you're on the ground, using all your effort just to drag yourself an inch. At 20 you're unconscious. You might also need to roll over exhaustion to succeed at anything that would get harder as you grow tired. Say, thinking clearly, using your strength, stuff like that.

Here's the sting: Whenever you're attacked by something that could kill you, roll over your exhaustion on a d20. If you fail, you die. That's it. Every single dangerous attack could kill you. If you succeed your death roll the attack missed, or maybe hit you somewhere non-vital; you can keep going, but the effort of dodging it has worn you down that little bit more.

Attacking itself is just uses whatever system you're most comfortable with; just substitute exhaustion for HP damage and roll for death if the attack has a reasonable chance of killing you. Here's a D&D example: Sally punches Jake. She rolls over his AC, and does d6 exhaustion damage. The DM judges that Jake couldn't be killed by that punch, so he doesn't roll for death. If Sally had grappled Jake and held his head underwater, it might have been a different story. The golden rule is: If you think this attack has a reasonable chance of killing this character, roll for death. 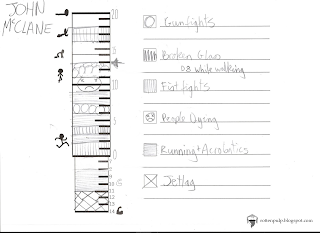 For example, you can see here that detective John McClane suffered some psychological trauma from seeing people die. By talking it out with his friend Al, he was able to heal that damage specifically. He might be able to heal the jetlag by getting a good nights rest. Something like a broken leg, though, would obviously need a splint. There's no such thing as a heal spell in this system; everyone can heal everything using common sense and real-world knowledge.

Whenever you heal some damage, figure out how many points of Exhaustion you have in total and put an arrow there. John McClane was up to 18, but healing brought him back down to 14. He puts an arrow there to show that he can still walk.

That's not all; your wounds can keep damaging you. The line underneath the type of wound is there for status effects; anything that's going to keep damaging you in future. You write down what condition will trigger the exhaustion and how much damage you'll take at that point.

For instance, McClane jacked up his feet by walking through broken glass.The line underneath shows that he'll take d8 damage "While walking", until he can heal that wound. If McClane was stabbed, he might take d6 exhaustion every half-hour as he bled out. If he became claustrophobic, he might take damage every time he entered a small space.

The arms along the side show that stronger characters get a bigger bar. Wizards & weaklings would start at 0. Thieves & average joes get the extra bar underneath, labeled with a white arm. That means they have four points to burn before they start being exhausted and have a chance to fail their death save. Fighters & strong characters would start at the bottom of the black arm bar, with 8 extra points total. No matter what system you use, you can hack this in by splitting all characters into weak, normal, or strong.

You can be 7 to 14 years old. Add one point to the under-bar for each year of age after 6. So, a 7 year old can go through one point before they have a chance of dying, while a 14 year old gets the entire bar as a grace period.

The older you are, the tougher you are. However! As you grow older, your mind becomes more and more clouded to the true nature of the world. That's where your age modifier comes in.

You add this number to any rolls concerned with seeing and understanding the dark truth at the center of everything. Mostly, it would be used as a perception check: You have to roll over a DC in order to actually see the monster (5, 10, or 15, depending on how unimaginably strange it is). Older characters may also have to roll in order to stop themselves forgetting crucial details and falling into the foggy delusion of adults: getting dressed for school, putting on their bag, and smiling as they wade into the black lake at the center of town.


This isn't finished yet: I'm still not sure if the numbers are right. The danger is that falling unconscious at 20 might be too soon; Ideally, I want the slow build of Call of Cthulhu. I've also drafted one for the d100, but that seems like too much. 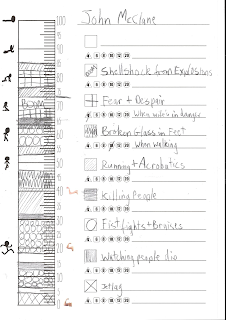 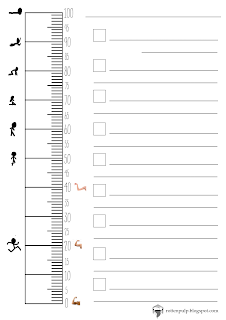 I might get a chance to playtest it sometime and check my math. If I do, I'll clean it up and put it in a character sheet with stats, age, and the Anti-Hammerspace Item Tracker.
Posted by Jack at Sunday, August 25, 2013 No comments:
Labels: Monsterparts, Mystery Teens 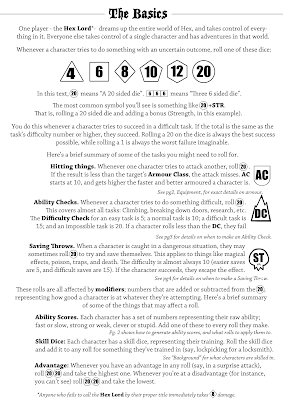 I doubt now that I'll ever make Hex into a full-fledged system. Who needs another D&D? I think I explain the basics of a D&D-like system pretty well in a single page here, but even in clarity and simplicity I'm beaten out by projects like Old School Hack and the 52 pages. There just isn't a real need for it anywhere but at my table.

This isn't a post of despair: just a quick note to let anyone who's just gone through the archives what exactly happened to the "Hex" image I posted all that time ago. I'm sure no-one was worried, but it's important to close off loose ends.
Posted by Jack at Thursday, August 22, 2013 No comments:
Labels: Hex

What's wrong with your baby?

I'm in the middle of a Uni course at the moment, but I'm making a game. You can catch just the tiniest, tantalizing sliver of it here:

I hope y'all don't mind, but I have a lot of thoughts on videogames that I might start posting here, in lieu of the typical RPG fare.
Posted by Jack at Sunday, August 18, 2013 No comments:
Newer Posts Older Posts Home
Subscribe to: Posts (Atom)