How to get to the Dwarflands

The Dwarflands lie beneath the Dying Desert. There are many tunnels, wells and caverns that lead there; this is the fastest route I've discovered. Other routes may be safer, but lie deeper into the desert, where the salamander packs flow like waves.

Part one: From Snake-Eye to Thief Town

Snake-eye is a small village at the edge of the desert, so infested with snakes that their local oasis is composed of 2/3rds venom. The locals drink this poison as water. Pure water itself is poison to them; the local apothecary will make you pay through the nose to get it, so be sure to bring your own supplies, and be careful to conceal them from the town guard.

The Snakers have a curious finickiness about showing skin, perhaps inherited from the dwarves below them. During the witching hour, it is forbidden to view any flesh at all. For this reason they sleep in long burqas, and close the whorehouse at 11.1 Conversely, you must bare everything before the eyes of god and the law. Everyone goes naked in the Snake Temple, which doubles as the towns' church and court-house. Thus, even the most boring trials receive massive audiences.

Under the village lies the true heart of Snake-Eye: Thief Town. The thief lords of the desert use underground caverns to smuggle goods everywhere under the sands, and Thief Town is their base of operations. Snake-eye acts as the above-ground cover, and it's true nature will become obvious as soon as you enter the swarming crowds. Anything you haven't nailed to you will be stolen, to be taken and sold in Thief town. Don't try to go to the guards: they're all corrupt.2

Your only hope of retrieving your belongings is to track them down to Thief-town. There are many secret entrances in the dry wells of Snake-eye, but they're often guarded, and the passwords change weekly. Your best bet is to befriend a local. If that fails, try barging through into the back room of the Asp Hole (the local inn). Descend the ladder there, and then cross through the tunnel below, stepping on the lettered tiles in this order: S, E, S, A, M, E.

Below is an enormous tunnel, perfectly circular, that stretches through the entire length of the desert.4 It's large enough to house a city. Instead, rickety wood ladders and platforms are lashed to the walls in a massive, decaying network that extends down to the twinkling lights of Thief-Town below. Crouch low to the wood as you climb. The ladders are infested with a debased species of lizard-dwarf, which love to leap across and pull travelers down into the dark.

Those able to communicate with these savages may gain access to their home platforms5, which hang in the center of the tunnel from a thread of some strange secretion. Their eggs litter the bottom of the platforms, stuck upside-down. When they hatch, the younglings fall to the ladders below. They swarm there, devouring anything they can, until they gain the strength to climb up and join the adults. The ground of thief town is a bog, fertile with the decaying corpses of lizard younglings: only the strongest climbers survive.

The houses and walkways of Thief Town are raised on stilts and lit with torches. The population is mostly Dwarves, evil or mutated7, exiled here from the lower dwarf lands. Thieves of every color ride here in centipede caravans to fence stolen goods from everywhere in the desert. If it's stolen, you can find it here. If it's not, they can get it.

Gold is king, of course, but Card Wars is god. The thieves play it religiously; a master can win a lot of loot without spending a cent. Trick is, the game doesn't appear to have any rules. Players place down cards in intricate combinations, then explain themselves. "Dog and Door," grins one, "That gives me five gemeralds and places the moon in blood quadrant, upgrading my eyes to diamonds." "Clever," responds the other, "But   you've left yourself open to my Hidden Imposter!" Neither will admit to making it up on the spot. The better bullshitter wins the day.

Cards must be stolen or won off other players; I've reproduced a selection below. 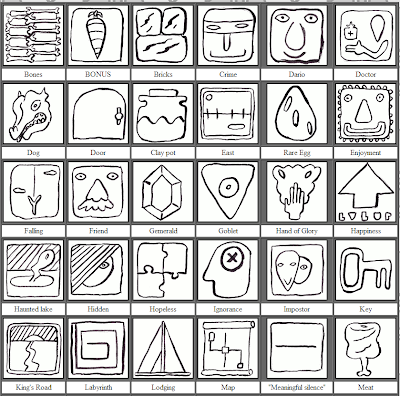 Full card list here - open "How to win at Goblet Grotto.zip" and then "Glyphs".

Thieves whisper that the game is more serious than it may appear. It was invented by the first Dwarves,8 in honor of their now-forgotten gods. Those gods still linger and can always be called to judge a match of their favorite game. Spit and swear "D'hol Kha-ti" ("I take this duel to the shadow realm"), and the stakes of the match will be enforced by their watchful gaze.9 The Thief King is said to be particularly fond of this past-time. His house is surrounded by torn souls, flapping on stakes - gamblers who were ripped apart by the old gods when they could not satisfy the impossible stakes he set.

Next: From Thief Town to the Seventh Pillar of Dwarfland

1 I've heard rumors that snaker flesh transforms monstrously during this hour. I tried to verify this, but the woman fled at the last minute.

2 If you happen to kill one of the guards,3 check their mouth. They keep all their money hidden there as teeth, and the richest guards will have grins of pure gold. Take care, though: many of them place booby-traps, set to explode with acid as soon as someone pulls out the wrong tooth. You can visit the local dentist if you wish to take similar precautions.

3 There is a rickety section of flooring in the lower cells of the jail that conceals a small hollow. It can fit two bodies, in a pinch.

4 And, if the dwarves are to be believed, the world.

5 The effort is well worth it. The lizards keep packs of chariot rats with the uncanny ability to cling to the walls and roof of the tunnel and run as if they were right-side up on solid ground. I managed to win a pack of my own in a game of Card Wars. They also accept barter; animals or men. 6

6 Whatever you do, do not allow the rats to gain a taste for man-flesh.

7 That is, more than four feet tall.

8 Or the first thieves, or both.

9 Never do this over ancient graves, or anywhere the forgotten gods have more than a flicker of power.
Posted by Jack at Thursday, January 31, 2013 No comments:
Labels: Desert, Dwarfland
Newer Posts Older Posts Home
Subscribe to: Posts (Atom)