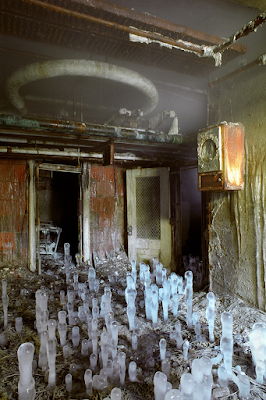 Corporations are people. So when a corporation is murdered, it leaves behind a ghost. A vast invisible presence that slowly rolls across the country. Spectres like this commonly rise after a company has been gutted by a private equity firm. If you could see it, it would look like a rolling wave of pale corpse-fat stretching across the horizon.
When you walk through a normal ghost, you feel cold. But these ghosts are so huge that people sometimes spend their entire lives inside them. For these poor souls, their entire life feels distant and foggy, like it's happening to someone else. They always feel cold, without knowing why.
As it rolls through an area, a curse of decay falls upon the land. You're laughing with your friends in the mall when you hear them fall silent. You turn to find it empty, dark, and full of stagnant pond water. The amusement parks are all abandoned. The stores are suddenly bankrupt. Reality dips by as much as 20%. These are null-zones, blank spaces on the map where benevolent Lord Mammon cannot pass, and the invisible hand of the free market drags all businesses into their graves.
These roving Abandonment Zones slowly move across the country. Elite hedge funds employ trained haruspices to track their movements, so they can buy and sell accordingly. Insiders are given tip-offs just before the ghost hits, allowing them to divest their holdings in the area. Like birds fleeing before an earthquake, the wise start packing their bags when they see the limosines leave town.
ENTITY 04: GHOST BRANCH
Danger: Medium.
Number Appearing: 1.
Speed: up to 6 miles per day.
As a ghost branch slowly moves over an area, it becomes more dangerous. Torches and sources of light last half as long and don't shine as far in the thick darkness. Items corrode and decay at double their normal rate. Safe areas will often have suffered some kind of decay. For example:

Directors commentary: This is a good way to change up a dungeon once the PC's have explored it a bit, or to make a previously safe space suddenly terrifying and unsafe. It shifts things around, blocks off the old safe paths, and makes things more dangerous. I would roll for one of these for something like every 1/4 rooms. Hazards should be extended across multiple rooms (eg, flooding across 3-4 rooms).

Any friendly NPC's in the area has a 40% chance of disappearing into the ghost realm. You can see glimpses of them as ghosts where they once stood, and hear echoes of their voices. They will reappear normally when the Ghost Branch moves on, with no memory of the incident.

Monsters and enemies become shrouded by fog. Their presence is heralded by screeching static in the smashed TV's that clutter the area. They each gain 1 or more abilities (DM's choice).
The Ghost Branch can be banished or convinced to move on by a trained corporate exorcist. However, the only way to remove it for good is to get revenge on whoever or whatever killed the company. The area within the ghost branch will be filled with files and a ghostly paper trail that leads to the perpetrator.
Posted by Jack at Thursday, October 27, 2022
Labels: Monsters, No-one gets out alive