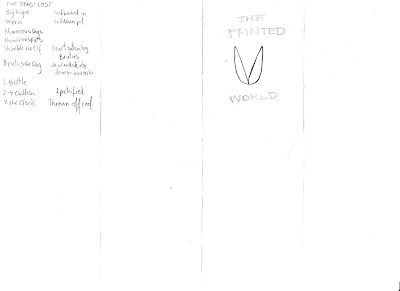 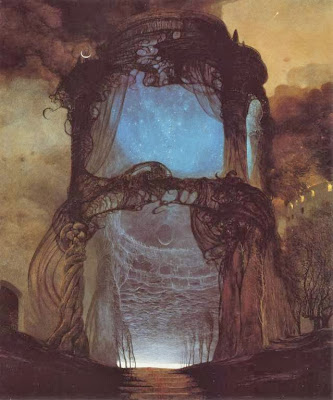 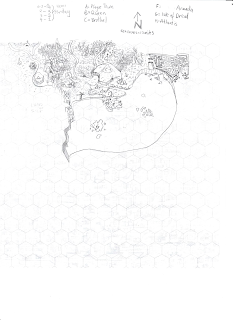 This is what the wilderness actually looks like. Both groups have only really investigated around A and B. 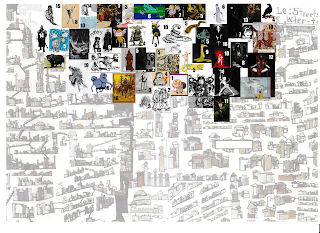 This is the sheet I use for encounters. I drop a few dice on this piece of paper, in the rough location of the party: Whatever they land on is what's roaming around today. In theory, this means the party will mostly meet things nearby, with some chance of the dice rolling away and giving an encounter from far across the map. In practice, this piece of paper is a little too small , and the dice keep bouncing off the paper completely.

Treasure is obsession. When someone is obsessed with something, they turn it over and over in their mind, like a clam with a piece of dirt. The result is an image of what they care about most, encased in precious stones or metals and buried at the bottom of their mind. If you take that treasure, they will forget whatever they were obsessed with. If you put a new piece of treasure inside a dungeon...

Eventually, player characters will twist their own little dungeons or strongholds into the landscape. These will start as tiny little huts at level 3 or so, expanding out into giant fortresses and temples, custom-made around the things they worry about.

PC's may be hunted by their ideal self or their feared self. Villains they killed in the city above may still exist in the mind-wilderness below as terrifying caricatures of their real selves.

My players haven't figured the full implications of this stuff yet. I want to let them discover the rules of the place themselves, but I think I've dropped the ball a little. I haven't given clear consequences in town for the things they've done in the wilderness. This is a learning process, and I think I'll get better at it as I go on.
Posted by Jack at Thursday, November 21, 2013