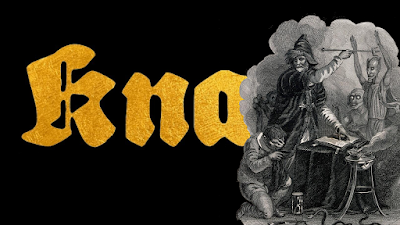 My first wizard for Goblin Knave today! Click here for the class.

This is a classic wizard. You don't hold with any of that modern nonsense - the classics will do just fine. I tried to stick close to the iconic wizard spells and a general feeling of sage-y-ness.

A huge debt is owed to the sage by Caput Capraem, and I used some wording from here.

Sadly I was unable to cut down the volume of stuff required for a wizard class and as such this class is two pages larger than any other class, at 4 pages in total! The weight of those two extra pages presses down upon my chest like the black dog itself.

That said, I'm happy that the whole wizard class and spell list can be handed to a player with just 2 sheets of paper, even including a reminder of how Magic Dice works. Very nice and easy to use at the table, especially if you're rolling up a new random character or introducing a new player.

I decided not to use this idea myself after testing but I might as well include it here for people who might be interested. This is an idea for KNAVE spellcasting - to fit with the inventory management part of that game. If you're using the knave rules you can use this to replace spellbooks in that system.

Objects of Power
The shape of the object is often connected to the spell it casts. For example, the Knock spell might be an ornate skeleton key. It should be something that fits your personal style of spellcasting. It could even be a small living animal like a rat, bat or toad.
Some powerful magic-users know how to make weapons, armour or other items into objects of power. You would need to track them down to learn this power.
Each time you learn a spell, you can create 1 new object of power. It can be anything. The spell animates and lives inside the object of power, a semi-sentient spirit or force. You can cast the spell for as long as you hold the object of power. If you lose it or it's destroyed, you lose the ability to cast that spell. Objects of Power are usually extremely durable and hard to destroy.
If you steal an Object Of Power from someone and you have magic dice, you can cast the spell inside it as normal. You don't inherently know what the spell is so you may need some experimentation to figure it out.
If you don't have magic dice (because you're not a magical class) you can still cast the spell from the Object of Power with 1 free magic dice. If you do this, the spell is released and used up forever. The object falls silent and may crack or fall apart, it's animating force gone.
One round of close examination (touching, sniffing) allows you to tell if something is an Object of Power, or magical in any way. 10 minutes of close examination allows you to make an Intelligence check to learn more about it.
Posted by Jack at Tuesday, March 22, 2022
Labels: Classes, Goblin Knave