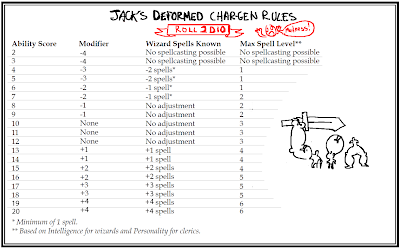 In Dungeon Crawl Classics you start by making 4 terrible 0-level peasants and running them straight through a Darwinian meat-grinder. Anyone who survives can go to first level. This evolutionary generation makes sure you're left with a character who can survive, while giving you someone a lot weirder than usual.

Unfortunately DCC still uses the classic DnD character roll, 3d6 - which is designed to make sure your character is as average as possible. Your ability score will be zero 50% of the time. That makes total sense when you're only rolling one character, but when you're rolling up four and throwing them at the wall to see what sticks you want a lot more random craziness.

"A lot more random craziness" is basically the defining attribute of DCC, from the weird dice to the wizard rules to the fumble and crit tables. The 3D6 just seem like a blind holdover from DnD. It works against the spirit of the game, from the funnel (Your peasants will all be average instead of hilariously deformed) to the Lucky roll (DCC characters add their Luck to a random roll, making everyone different - but this bonus will just be zero half the time, so it barely matters).

SO! I've made this radical new table where you roll 2d10 for char gen. Along with the extra modifiers, this gives your characters a much better chance of getting high and low ability scores, which is likely to make them simultaneously crippled and amazing. I wouldn't suggest using it in normal DnD, but when you're rolling up 4 characters one of them is always going to be usable, and this table will give them an extra dose of weirdness with it.